The following are 10 important facts about Florida automotive accidents. If you were in an accident, talk to a Fort Lauderdale car accident lawyer at the Law Offices of Wolf & Pravato. Call 954-633-8270. For more legal help contact our Fort Lauderdale Personal Injury Lawyer.

A Florida Traffic Crash Report is required within 10 days of a car accident if the accident:

Florida requires all drivers to carry at least $10,000 in personal injury protection benefits. PIP covers the policyholder’s medical bills and a portion of lost wages up to the coverage limits.

Further, drivers in Florida must carry property damage liability coverage of $10,000. Many choose to carry bodily injury liability and uninsured motorist coverage as well. Collision and comprehensive coverage are other optional types of auto insurance in Florida that many people carry on their policy.

Per Florida law, to qualify to file a lawsuit for pain and suffering, accident victims must demonstrate that they suffered injuries that meet specific criteria. The injuries must cause:

Hit and Run Accidents Represent a Major Problem in Florida

In the state of Florida, motorists involved in an automobile accident must, by law, stay at the scene of the accident and call for help. Failure to comply with this law qualifies as a hit and run. The penalties range from 60 days in prison and a $500 fine up to revocation of their driver’s license for at least three years, a mandatory prison sentence of four to 30 years, and a $10,000 fine for fatal hit and run accidents. 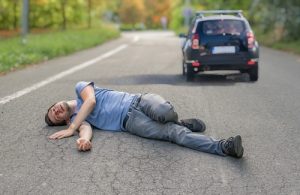 Despite these stiff penalties, a shocking 25 percent of Florida car accidents involve a hit and run, according to FHSMV. If you were the victim of a hit and run, you may be able to file a claim with your uninsured motorist policy to recover compensation for your medical bills, lost wages, pain, and suffering, and more.

Most Accidents Happen Closer to Home

According to the National Highway Traffic Safety Administration (NHTSA), around 52 percent of all accidents nationwide occur within five miles of an individual’s home.

Much of this may be due to drivers’ familiarity with their neighborhood putting them into “auto-pilot” mode, which may relax their reflexes.

Florida Drivers Are Bad About Texting and Driving

Distracted driving can take several forms: visual, manual, and cognitive. Because texting involves all three forms of distraction, it is highly dangerous when done behind the wheel.

Teen Drivers Get into a Lot of Automotive Accidents

Motorcycle accidents result in devastating injuries, largely due to several factors, including the lack of an enclosure to protect the motorcyclist and the relatively smaller size and weight of motorcycles compared with other motor vehicles.

South Florida holds the dubious honor of having its two largest counties – Miami-Dade and Broward – leading the way in a total number of vehicle accidents in 2017, reports FHSMV. Palm Beach County also saw a lot of automobile accidents in 2017.

If you were injured in a Florida car accident, the legal team at the Law Offices of Wolf & Pravato will work diligently and compassionately to help you recover all the damages you suffered in your accident so you get the compensation you need to pay your bills, get medical treatment, and compensate you for your pain and suffering.

Call our office today for a free case review and to secure help from a Fort Lauderdale car accident lawyer: 954-633-8270.

We also help the victims of a car accident in the following cities: