What is a Tort Claim?

What is a Tort? 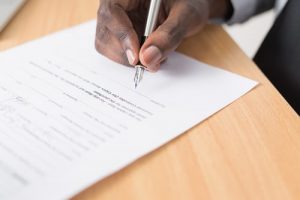 According to the legal definition given by Cornell Law School, a tort claim outlines an act that causes injury or harm to another party, amounting to a civil wrong that allows the courts to assign liability. Specifically, an injury, in this case, can mean any imposition on another person’s legal rights. Further, the legal understanding of harm in a tort claim is meant to describe a victim’s overall losses.

What does Tort Mean: A Tort Claim is an Act

In short, a tort claim is any act that can harm a person’s wellbeing, thereby infringing on their rights and making the offender liable for their pain and suffering. When found legally responsible, the liable party may have to pay out damages related to any emotional, monetary, or physical losses the victim has suffered, as well as various other applicable damages.

Is Tort a Civil Case?

A tort is a civil claim where a claimant has suffered damages due to the actions of the person who committed the act. In this type of claim, the person who committed the act can be held legally liable. The losses incurred by the claimant may be financial, physical injuries, emotional distress, invasion of privacy, and others. Basically, a tort claim is an act committed by one person that causes harm to another.

A Fort Lauderdale personal injury lawyer can help you file a tort claim to recover compensation for any harm you suffered.

Circumstances That May Warrant a Tort Claim

Numerous personal injury and invasion of privacy offenses may result in a tort claim, including instances of assault and trespassing. However, tort claims branch out from the basic tenets of traditional personal injury law, because they include more abstract wrongdoings like fraud, emotional abuse, and defamation of character.

Accordingly, there are many different types of tort claims that encompass a variety of misdeeds, ranging from traditional acts of negligence to property crimes and beyond. Tort claims are interesting in that they can also be filed against the United States government in an attempt to recover unrightful losses.

As detailed by Cornell Law School, examples of tort claims can include:

What is an example of a Tort?

There are several different kinds of torts. 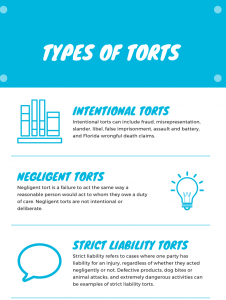 Intentional torts can include fraud, misrepresentation, slander, libel, false imprisonment, assault and battery, and Florida wrongful death claims. They are actions that were deliberately taken. A tort may result in a civil suit where the defendant can be found liable and ordered to pay monetary damages to the plaintiff.

A negligent tort is a failure to act the same way a reasonable person would act to whom they owe a duty of care. Negligent torts are not intentional or deliberate. There must also be an injury that is the result of the breach of that duty.

Examples of negligent torts are motor vehicle accidents, dog bites, medical malpractice cases, slip and falls, and wrongful death cases. For example, a doctor does not double-check their chart and operates on the wrong part of your body.

Strict liability refers to cases where one party has liability for an injury, regardless of whether they acted negligently or not. Defective Products, dog bites, or animal attacks, and extremely dangerous activities can be examples of strict liability torts. As an example, a defective product injures a customer. Because strict liability laws hold the manufacturer responsible in most cases, the customer does not need to prove the manufacturer acted negligently to recover compensation. Our Fort Myers personal injury lawyer can help you to recover the compensation that you deserve.

What is an Example of Tort Law?

Torts cover a range of economic, private, and social implications, depending on which tort law the claim falls within. For example, some torts may deal with business contracts, while others may deal with a neighbor leaving excessive amounts of garbage in their yard.

In general, the types of tort law include:

This includes actions such as playing loud music, polluting the neighborhood creek, and not cleaning up garbage.

These encompass claims like product liability and dog bite cases, ultimately stating that a negligent party does not need to know they are putting people at risk in order to be liable for ensuing injuries.

These include physical attacks like assault, but also cover fraud, trespassing, and intentional emotional distress.

This type of tort is the basis of traditional personal injury law, including motor vehicle accidents, medical malpractice, and slip and fall cases.

These mostly center on business dealings, including negligent misrepresentation, interfering with trade, and inducement of breach of contract claims.

What Are Some Examples of Tort Cases?

If a driver hits you and runs when having a stop sign.

If you fall in a private or public place because of someone’s negligence.

If you caused a brain injury in the construction zone or other because of the negligence of others.

If someone opens a ca door and suddenly you hit by it.

If the dog bits you because of the dog owner’s negligent behavior.

A tort claim can also be brought against the United States federal government or any branch of the government, including the U.S. Department of Veterans Affairs (VA), for money damages due to property loss, injury, or death.

Here at the Law Offices of Wolf & Pravato, we have represented clients in numerous tort claim cases. However, these civil actions do not last indefinitely. If you have been injured and wish to seek damages, it is important that you take legal action within the four-year statute of limitations dictated by the Florida State Legislature Statute § 95.11.

In cases of medical malpractice related to nursing home abuse, Florida State Legislature Statute § 400.0236 dictates a two-year statute of limitations. Other unique tort claims have their own statutes under Florida law.

Speaking with a personal injury lawyer may help you better understand the types of legal factors at play if you choose to move forward with your claim. To get started with a free consultation and case review today, contact a team member at the Law Offices of Wolf & Pravato at (954) 633-8270.

What is the Federal Tort Claims Act?

Enacted in 1946, the Federal Tort Claim Act is a legal means for individuals who get wrongfully injured to pursue legal action against an employee of the U.S. government who is at fault by negligent and wrongful acts.

A Federal Tort Claim Act is related to any civil case where the harm caused by civil wrongs results in personal injury to one individual and the victim of the tort seeks financial compensation for that harm. A tort is a technical word for civil wrong that results in injury. The tort claim includes investigation, medical reports review, and rational evaluation by experts to clarify the needs and damages of the victims.

How do I get the coverage for the Federal Tort Claims Act?

In a case of medical malpractice or typical personal injury, you can file a lawsuit in court. However, under the FTCA, to receive coverage, at first, you need to file a claim with the federal agency that is responsible for the employee’s conduct. It is required to file your claim within two years of the injury, and the response of the agency must come within six months. If the agency rejects your claim or refuses to pay for the requested damages, you can file a lawsuit at that time. According to FTCA requirements, these claims are reviewed and/or litigated by the related U.S. Department, Office of the General Counsel, and the Department of Justice.

How does a tort claim work?

A tort claim is any act that can harm the wellbeing of a person, by that means violating their rights and making the guilty party liable for their damages and sufferings. The FTCA allows you to demonstrate that the damages caused to you are by the negligent acts of a government employee who was working within the capacity of their duties, and you can sue the government for this negligence.

If found legally responsible, the liable party may have to provide fair compensation for any emotional, monetary, or physical damage the victim has suffered, and also for various other applicable damages.

What is the difference between a tort claim and a lawsuit?

Claim and lawsuit are two stages of a tort action. The first one is a tort claim. It is a legal filing in response to the negligence of duty of care owed to an individual or wronging the person intentionally. It is also possible to file tort claims based on strict liability, in which there is no precondition for negligence or intention. Once the claim is filed, the opposite party determines whether to pay the settlement or not. If yes, they also determine how much to pay. The claimant can file a lawsuit if the settlement is not satisfactory. In this situation, the case proceeds to litigation and sometimes to trial.

How do you prove a tort claim?

It is necessary to prove a tort to hold a person or company legally responsible for the harm you suffered. This must be proved in court for four things: duty, breach, causation, and damages/harm.

We also help the victims of personal injury in other cities: