In the 1970s and ‘80s, mopeds and scooters enjoyed great popularity. The use of these vehicles dropped in the subsequent decades, only to resurface in recent years, with usage and sales surpassing those of 30 and 40 years ago.

The resurgence in electric scooter popularity initially manifested in an increasing number of scooters popping up like birthday presents and holiday gifts. Electric scooter sales have increased by up to 60% in recent years, according to the National Center for Biotechnology Information (NCBI).

Some of these sales can be attributed to the combined effect of a struggling economy and fluctuating fuel prices. With scooters’ touting between 60 and 100 miles per gallon, it is easy to see their appeal as an alternative to cars. 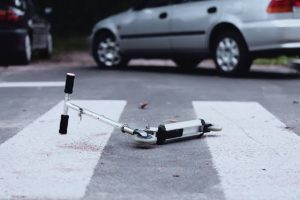 Motorized scooters, also known as electric scooters or e-scooters, are defined by Florida Highway Safety and Motor Vehicles (FLHSMV) as “any vehicle not having a seat or saddle for the use of the rider, designed to travel on not more than three wheels, and not capable of propelling the vehicle at a speed greater than 30 miles per hour on level ground.”

FLHSMV stipulates that electric scooters cannot be titled or registered in the state of Florida, nor can they be operated on the “roadways or sidewalks of the state.”

NCBI recently conducted a study to identify risk factors between severe and non-severe driver-related injuries stemming from electric scooter accidents. The group used the Florida Traffic Crash Records Database (FTCRD) to identify all crashes involving mopeds and scooters between 2002 and 2008.

Florida served as an ideal geographical focus for this study because of the state’s high traffic density and the popularity of scooters among both tourists and residents.

Drivers Behind the Increasing Number of Reported Electric Scooter Injuries

Electric scooter accidents incidents are on the uptick, thanks to the increasing popularity of these modes of transportation and the recent flooding of cities with dockless e-scooters provided by companies like Bird and Lime.

According to an article in the Washington Post, one Salt Lake City Hospital reported a 161% increase in the number of electric scooter accident victims coming through their doors, as compared with the number reported in the same time frame the previous year.

The trend has been evidenced by doctors across the country who are documenting the increase as a growing public safety crisis.

Several factors are contributing to this crisis:

In November of 2018, CNET reported that electric scooter rental companies Bird and Lime were preparing to introduce their own in-house scooter models. At present, these companies use scooters manufactured by other parties, like Xiaomi and Segway.

According to the user instruction manuals that come with these vehicles, the electric scooters should be:

The lapses in manufacturer recommended use and maintenance pose risks to individuals unwittingly renting these electric scooters at tourist destinations and downtowns, unaware of the potential dangers of doing so.

The NCBI study underscored several dangerous outcomes of electric scooter accidents. The outcome of the greatest concern in this report was that of severe-fatal injury.

Severe injuries include those that appear at the scene of the accident as either debilitating (laming, crippling, or weakening) or requiring that the injured party be transferred to a higher level of care.

Considering the degree to which scooter operators are exposed when operating these vehicles, it is not surprising to find that injuries caused from a scooter accident can often be severe, even fatal.

Electric scooters are lightweight, like bicycles, which means they can get thrown quite a distance when hit by a car. These vehicles tout speeds greater than bicycles, which adds to the force of a collision, the impact of which can yield significant personal injuries.

Finally, because relatively few electric scooter operators wear helmets, the potential for brain damage increases in scooter accidents as compared with accidents in other vehicles.

Among the most commonly reported electric scooter accident injuries are:

Regardless of your personal injury, the Fort Lauderdale scooter accident lawyer can validate your rights to recover medical expenses, lost wages, and pain and suffering and also help in your electric or bird scooter lawsuit.

Damages You Can Recover From an Electric Scooter Accident

If your electric scooter accident resulted from another party’s negligence, you can receive compensation for your expenses, injuries, and losses. Either the negligent party’s insurer or the negligent party he or she is responsible for compensating you. A civil court will hear your case and determine what you are due.

Here are some examples of just some of the damages the court might reward you: 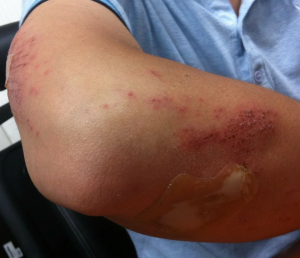 If you have been injured in an electric scooter accident, call the Law Offices of Wolf & Pravato and their personal injury lawyers in Florida for a free consultation. A Florida scooter accident attorney may be able to help you. You can reach us by phone at (954) 633-8270.