Have Red Light Cameras Reduced The Amount Of Car Accidents At Intersections?

About 70 municipalities in Florida use red light cameras, including St. Petersburg, Tampa, Miami, Orlando, Clearwater and five other cities in Pinellas County. Tickets for running a red light come with a steep fine at $158. 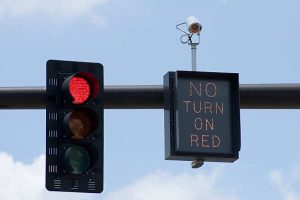 Like most states that have implemented the use of red light cameras, Florida also has mixed opinions when it comes to whether or not red light cameras reduce the number of car accidents at intersections. When looking at statistical reports the numbers can be misleading.

A report analyzing the amount of accidents in St. Petersburg said that the red light crash rate fell by 31 percent based on data collected from November 2011 to October 2012, compared with the three-year average preceding it. But what the report failed to reveal was that rear-end wrecks at intersections with red light cameras jumped 44 percent and overall crashes at those intersections increased 10 percent from the previous year. State-wide, similar statistics pointed out that interpretations all depend on how you dice the data.

What do drivers think? Let’s see what the online forums have to say about the use of red light cameras:

This commenter says, “They have some positive influence on the rare “T-bone” side collision, but the increased number of drivers who slam on their brakes to avoid a ticket have led to an increase in rear end collisions.

Another commenter thinks red light cameras are not about safety at all, their sole purpose is to generate revenue from violations. When it was clear they were not generating the expected revenue in his town, planned future installations were dropped.

Another commenter questions their legality. “In my town, they started installing red light cameras at certain strategic intersections and announced that they had plans to do over a dozen more installations later. This “second batch” of cameras was held up by the Missouri legislature over questions of their legality, and it was a full year before the city was legally allowed to move forward.”

One commenter says “I’ve seen them misfiring on perfectly legal cars using the intersection.” It was enough for him to not to trust them and he was sure he wasn’t the only one.

Another person writes in with this comment, “The answer is both yes, and no, simultaneously. Red light cameras, and by their design, the threat of fines from them, have ‘encouraged’ motorists to pay more attention to the signals at intersections known to have enforcement.“ He also said stopping at a shorter distance instead of going through the yellow light is dangerous because short stops results in more rear-end collisions at these intersections because of drivers following too close, and not paying proper attention.

In response to the above comment, another writer argues that “the vast majority of rear-end collisions at red-light enforced intersections are minor, with vehicle damage being the only result. Most don’t even set off airbags.”

What is your opinion? Do you think that reducing the number of auto accidents caused by running red lights compared to an increase of rear-end collisions due to inattentive drivers is an acceptable trade-off?