Auto Accidents Involving Bikes: What Are Your Rights?

Many Americans are making massive lifestyle changes in an attempt to get healthy. One of these methods has been popular for years, but is now making a significant resurgence—cycling. An estimated 47 million people went biking at some point in the last calendar year. This includes those who are looking to stay healthy, those who are trying to be environmentally conscious, and those who are just looking to enjoy themselves outdoors. However, there is another, more disturbing statistic. Approximately two people in the United States are killed each day due to biking accidents. This amounts to over 700 people a year. Many of these accidents are due to collisions with motor vehicles, which adds an extra level of danger. Because of the size and speed difference between cars and bikes, a cyclist involved in such a wreck is more likely to suffer more serious injuries, including death or paralysis. That is why it is so important to not only know how to stay safe on the road, but also how to protect yourself if you are in an accident so that you can recoup damages. Here’s what you need to know about bike versus car accidents so that you can be fully aware of your rights.

In most states, a bicycle is looked upon as just another vehicle on the road alongside motorcycles, cars, and trucks. As such, bicyclists are expected to follow all of the rules of the road. But other vehicles, such as cars that you share the road with, are also supposed to treat you the same as they would an actual car driven by another person. For legal purposes, the bicyclist is the driver and the bicycle itself is the vehicle. In order to not be at fault in an accident, a bicyclist should follow these guidelines:

If you adhere to these guidelines, then the likelihood you will be at fault in an accident is slim. This, however, is cold comfort if you are struck by a car. As was previously mentioned, accidents between a car and a bicycle can often lead to paralysis or even death. However, more minor accidents can lead to broken bones (especially ribs, legs, and arms) as well as severe head injuries including concussions and brain trauma. 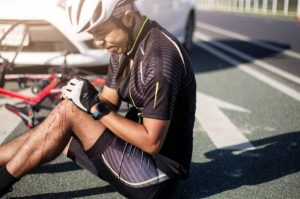 If you or a loved one are injured in a bicycle/car accident and the car driver is deemed at fault, then you can receive compensation to cover an array of damages including medical bills, lost salary due to missing work, and pain and suffering. However, some states (including Florida) treat car accidents lawsuits under a “no-fault” system. In this case, the bicyclist’s insurance company has to cover the medical bills and lost wages, even if the car driver was at fault in the wreck. Under this law, the driver can only be held financially liable if a “serious injury” threshold is met by the plaintiff. If it is simply a bump that results in a broken bicycle or broken bone, then the serious injury threshold hasn’t been met. However, it is possible to file a lawsuit against a car driver if the accident resulted in permanent injury (such as paralysis), significant and permanent scarring or disfigurement, and death. As to whether or not an injury meets this threshold, it is basically up to the court to decide. That is why it is so important to consult with a Fort Lauderdale personal injury attorney who is experienced at this type of suit who can help you determine if you have a case or not.

Contact us at the Law Offices of Wolf & Pravato

A lawsuit involving a car versus bicycle accident can be a complex and difficult endeavor. The lawyers at Law Offices of Wolf & Pravato are well experienced with this type of work and are available to help you determine what your rights are in such a case. Contact them for a consultation so that they can inform you of your rights.