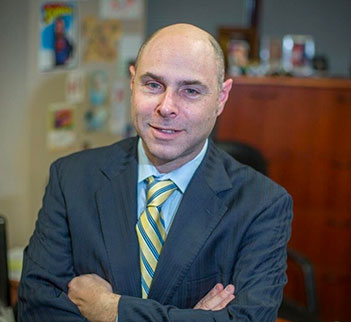 Brian Malamud is an Associate at Wolf & Pravato, and heads the firm’s PIP Litigation Department. Brian has been aggressively involved in litigating PIP cases since 2002. He has consistently obtained favorable settlements, representing both medical providers and insureds alike. He has also litigated personal injury matters, in a variety of cases, including: Automobile Accidents, Slip and Falls, and other general negligence cases.

Born in Middletown, New York, Brian soon relocated to South Florida where he has since lived. He graduated with a Bachelor’s degree in Psychology from the University of Florida, where he was a member of Sigma Alpha Mu fraternity. He is married and the proud father of a daughter and son.

Brian is a member in good standing of the Florida Bar Association.

Brian graduated from Nova Southeastern School of Law in 2001. He was in the top 25% of his graduating class, and achieved a Book Award for carrying the highest score in Constitutional Law.

“I am so happy to have chosen this firm to represent me during this tedious and difficult time after my car accident. I instantly felt that I was in the hands of more-than competent, friendly, and professional staff. Melissa Torres was my assigned case manager and I was so impressed by her communication with me during this whole process. I was in the care of Attorney Brian Malamud. When I tell you he went over the details and possible outcome scenarios of my case with a fine-toothed comb, I am not kidding. The attention that was given to me from start to finish was more than exceptional. Thank you Wolf & Provato!””.

“I would highly recommend Wolf & Pravato. The whole team was highly professional and helpful. They kept me informed ever step of the way. That actually make you realize you are not just a number but a member of their family that they care what happens with your case. Thank You Richard Pravato and Betsy for all you have done to make this as painless as possible”.

“The $1 million helped me pay my medical bills and my UM coverage...”

“The Wolf and Pravato Law firm really went to bat for my wife, who was in a horrible auto crash. Having someone on your side who truly cares about your well being the future good health is worth all the money in the world! ”
See all testimonials